Robort doesn’t always know what he’s talking about, but he sure does have a lot to say about food. If you’re not also a robot, dog, or robot dog, it’s best to just ignore what he says and skip to the recipe

What are Shanghai Style Dumplings?

Shanghai Style Dumplings are a type of steamed dumpling that is commonly found in Shanghai, China.

The shanghai style dumplings are usually made with a thin dough wrapper and has a meat filling. They are usually served with vinegar and soy sauce for dipping.

Shanghai style dumplings are a popular dish in Shanghai and other parts of China. It is a type of pan-fried dumpling that is filled with meat, cabbage, and other vegetables.

The most common filling for this dish is pork with cabbage or chives. The dough for the wrapper can be made from wheat flour or glutinous rice flour. It can be steamed or fried before serving.

They differ from the traditional Chinese jiaozi and wonton because they have a thin wrapper and the filling is made with ground pork, minced shrimp, ginger, soy sauce, sugar, salt and sesame oil. The filling is wrapped in dough made from wheat flour mixed with water to make a dough ball.

Eating a fresh shangai dinugger is a very different experience than eating a frozen or microwaved one. When you eat them, you should be mindful of the following tips:

-Dip them in white vinegar and soy sauce

-Eat them with ginger and green onion

-Eat them with chilies and vinegar

The Shanghai dumpling is a type of Chinese dumpling that is made from a thin wrapper, usually with minced pork and cabbage filling. They are traditionally boiled in water or steamed.

What is the Best Sauce for Shanghai Style Dumplings?

Shanghai style dumplings are usually served with a dipping sauce, which can be either sweet or spicy. The sauce is not just for flavor and can also serve as a way to balance the meal.

The most common ingredients in this sauce are soy sauce, vinegar, sesame oil, garlic, chili peppers or chili oil and sugar. Some people also add ginger to their sauces for extra flavor.

The sauce for Shanghai Style Dumplings is a spicy sauce that can be made from soy sauce, rice vinegar, sesame oil, sugar, ginger and garlic.

Why this sauce is so Amazing

This is the simplest and best peanut sauce recipe ever. It is a shao xing style dumpling peanut sauce that uses a simple combination of ingredients to make an amazing tasting sauce.

The key to this recipe is using raw peanuts which provide a much better flavor than pre-roasted ones. It also takes less time to make than many other sauces because it doesn’t require any cooking or pureeing.

This is a recipe for peanut sauce that is simple and delicious. It’s made with just four ingredients, and it can be used as a dipping sauce or as a topping for dumplings, noodles, rice dishes, etc.

This peanut sauce recipe is perfect for any dumpling dish.

This is a peanut sauce recipe that you will be able to make in less than 10 minutes. It has a unique taste and it’s so easy to make that it’s really worth the effort.

The Simplest & Best Peanut Sauce Recipe Ever – Why this sauce is so Amazing?

This peanut sauce recipe is perfect for any dumpling dish. It has a unique taste and it’s so easy to make that it’s really worth the effort.

Pork potstickers are a popular Chinese dish made with ground pork and vegetables wrapped in a thin dough skin and then either boiled or fried. The dumplings are served as an appetizer, snack, or light meal.

The ingredients for potstickers vary by region. In China, they are often made with minced pork seasoned with soy sauce and sesame oil, while the filling in Japan is typically seasoned with miso.

In Shanghainese cuisine, a typical ingredient is green onion (scallions). In Korea, they are often filled with kimchi. 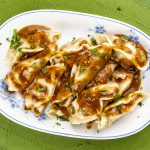