There’s a great poutine shop in Toronto called Poutini’s. My favourite poutine they make is called The Works. It’s bacon, sour cream and green onion on poutine. I was craving it recently, but the weather has been pretty shitty so I didn’t want to leave the house.

Where Canada is, who Canadians are, and what Canada is known for?

Canada is known for its natural beauty, diversity, and multiculturalism. Canada has a rich history that includes the First Nations, French, British, and more recently Americans. Canadians are proud to be part of this diverse culture that includes people from all over the world who have come together to create something new- Canadian culture.

Canadian food varies from region to region because it reflects each region’s history, climate and geography but there are some dishes that are popular across the country like Poutine– deep fried french fries with gravy or cheese curds topped with more cheese curds.

Canada is known for its natural beauty, hockey, maple syrup, and poutine.

One of Canada’s most famous foods is poutine which is made up of French fries, cheese curds and brown gravy. The dish was invented in Quebec City in 1957 when a restaurant owner named Jean-Paul Roy decided to combine french fries with cheese curds that he had on hand as a way to use them up before they spoiled.

Canadians have been known for their quotes about their home country like “I love Canada because we have everything here.”

There are many Canadian foods that are popular around the world like poutine and maple syrup. Canadians have been known to be polite people who are humble about their success and achievements in life.

Canadian comfort food is influenced by the many cultures that make up Canada. From the west coast to the east coast, there are a variety of dishes and flavors that represent our national identity.

The dishes are typically hearty, filling, and comforting to those who enjoy them. They are also well-known for being made with simple ingredients like butter, flour, sugar, and milk. These ingredients are often found in one’s kitchen cupboard or fridge.

What Makes the Perfect Poutine?

A poutine is a dish that consists of French fries and cheese curds, covered with brown gravy. This dish has become popular in Canada, especially in Quebec.

The perfect poutine is a hot dish that is crispy on the outside and soft on the inside. The fries have to be fresh and crunchy and the cheese curds are not too salty or sour. It should also have just enough gravy to cover all the ingredients without being too runny or thick.

Toronto is a melting pot of cultures and food, with restaurants that offer the best of every cuisine imaginable. The city is home to some of the best poutine in the world.

The perfect poutine starts with fries. They are usually cut thinner than you would find in most other places and have a light dusting of salt on them before they are cooked. The fries should be crispy on the outside and fluffy on the inside.

The cheese curds are an essential part of any poutine recipe, but what makes them truly special is how they’re cooked. Unlike most places, Toronto’s cheese curds are fried until they’re brown and crispy on the outside while remaining soft and gooey on the inside. This gives them a much more intense flavour than many other places.

Poutines Throughout History and Around the World Today

Poutine is a dish that originated in Quebec, Canada. There are many variations of the dish throughout the world, but poutine as we know it today consists of french fries topped with cheese curds and gravy.

The first documented mention of poutine was in 1957, when a restaurant called Le Roy Jucep advertised “a delicious new dish called Poutines” on its menu. The word ‘poutine’ comes from the word ‘patate’ which means potato in French.

Poutine became popular throughout Canada in the 1970s and 1980s as fast food restaurants began to offer it on their menus; it has since spread around the world to countries such as Japan,

Poutine is a popular Canadian dish that is traditionally made with french fries, fresh cheese curds, and brown gravy. It has become a popular dish around the world.

What Makes The Works Poutine so Unique?

The word Poutine comes from the french verb “Poutiner” which means to mess up or to make a mess of something.

Many people in Canada eat poutine all year round but it is most commonly eaten during the Winter Holiday Season.

The best-known poutine dish in the world is the one from Quebec. The dish consists of french fries, cheese curds, and hot gravy; it is typically served as fast food.

Poutine was invented in 1957 at a restaurant called Le Roy Jucep in Warwick, Quebec.

A Comprehensive Guide to the Secrets of Poutine’s Success

A Look at The Importance of Poutine in Canadian Culture

Canadians love poutine. It is a dish that has become an integral part of the Canadian culture.

Poutine is a dish that is made up of french fries, cheese curds and gravy. The gravy can be beef, chicken or vegetarian depending on the person’s preference. This dish originated in Quebec in the 1950s and it has been gaining popularity ever since.

Poutine is a dish that has been around for over 50 years and it is still popular today.

Poutine is Canada’s national dish and it is also the most popular dish in Quebec. The word poutine comes from the french word “poutiner” which means to “to fry under a layer of fat or oil”.

People love poutine because it is cheap, easy to make at home, and can be eaten with your hands.

The popularity of poutine has grown in recent years because people are looking for comfort food that tastes good but doesn’t have many calories or carbs in them. 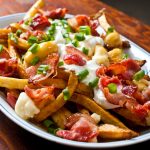 There’s a great poutine shop in Toronto called Poutini’s. My favourite poutine they is called The Works. It’s bacon, sour cream and green onion on poutine. I was craving it recently, but the weather has been pretty shitty so I didn’t want to leave the house.
Cook Time15 mins
Total Time15 mins
Course: Dinner, Lunch
Cuisine: Canadian
Servings: 2 serving
Calories: 856kcal