Traditionally you would serve this stew over rice. I was looking for a stew experience closer to my own East Coast Canadian roots, so I subbed in potatoes. Also instead of normal Brazilian white fish varieties one might expect in this stew I used a couple closer to home, but any firm white fish will do. 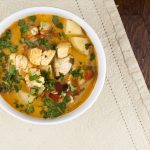 Paprika Chicken and Smokey Lentils on a Mixed Pepper Salad